shizit.net was the original url and website for the shizit. besides mp3.com, you could download new tracks here, buy new releases, and get p.o. box info to have an empty envelope stuffed with stickers. there was a very active forum, “the shizit militia” to discuss just about anything with like-minded people, as well as the band themselves. the forum was moderated by brian, name dropped by jp in the bridge of audio jihad ii. after 2002, the domain redirected to E115 records to sell off all remaining copies of soundtrack for the revolution. it remained this way for a few years before changing hands to slum lords, where it was squatted and served spam “search results” pages. this was the domain’s situation until very recently when the author of this site discovered it was available for purchase for a cool twelve dollars american. 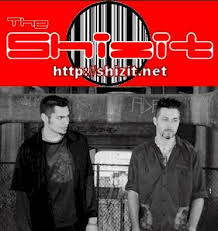 the author is a web dev and server admin living in a corner of the midwest forgotten by all manner of states, corporations, and benefactors. he lives with his girlfriend and pomeranian who have to put up with his insufferable obsession with art, design, and music scenes which claimed little relevance during their peak and none today.

this new site exists for those who remember and those who are new. the band doesn’t seem particularly interested in making this music available, but were entirely supportive when asked about putting this up. after all, these tracks have existed on file sharing networks for years, audio quality varying. so if you lost your softer cd years ago, you can still listen here. if the band was named dropped by the internet, a friend, an article, you can discover what they were about here.

thanks are in order to those who maintained the shizit militia fan pages in years past, keeping this music up for anyone who remembered. some of the information on this current site would not have been available without their work.

the author would like the shizit to know, should they ever read this page, that although they have both expressed some pride and embarrassment, as well as regret over the period of time they spent together at the turn of the millennium, their music succeeded. it spoke directly to the author and his group of friends in that forgotten midwest corner, demanding we ask for more out of our politics and culture.

JP, Brian, you guys were the punk rock heroes we needed.

Hello. It’s been about a year since I initially put up everything here, and am giving the site a once over to make it “definitive.” I will, someday, compile these odds & ends into an “extras” package for your organization. Email me [[email protected]] if you want me to tell you when I do finally have this finished.